A string of tiny black balls.


The mid-afternoon sun in the back yard looked attractive and I decided to read outside. The clear sunny sky suggested the need for shade and I decided to unfurl the umbrella at the patio table. With my chair strategically placed to offer my back to the warm sunlight but my book to the shade, I sat down to read Mosquito Coast, the Theroux story about a family driven to the brink of destruction by a brilliant but socially dysfunctional father. I only had a few more chapters to read.


I settled into the chair and reached for the book, which I had placed on the table only a few moments before. Beside the book was a string of tiny poop balls, three in all, each black and not more than 2 mm in diameter.


Not bird poop, I thought, as I brushed it off the table.


I opened the book and read for awhile. The characters were in sweltering jungle heat and I was soon thirsty enough to reach for the water I'd brought with me. When I reached for the glass I saw a string of three tiny poop balls on the table.


Must not have brushed it away, I thought, and I brushed the poop away, but with more authority.


What made that poop, I wondered? There was a chipmunk in the yard, but this poop was too tiny.


Looks more like a mouse, I thought as I picked the book back up.


The neurotic father had just about killed his entire family when his make-ice-from-fire invention exploded. The whole book was like that. The family reeled from one father-created disaster to another. The inhospitable jungle he had moved them to was filled with all manner of treacherous insects, amphibians, reptiles, and animals. As I reached again for the glass of water, I was thinking about how lucky I was to live in Alberta where creepy crawly things weren't common.


Two stings of poop were lying on the table, side by side, as if to mock my previous efforts.


The sudden realization that there was something alive above me and that that unknown something was literally shitting on me was disquieting.


I didn't look up. I stepped back from under the umbrella and then I looked in.


I couldn't see anything.


Must be a mouse, I decided. 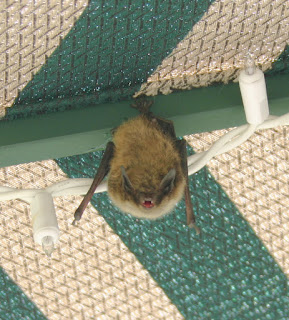 I walked around the umbrella and saw the culprit trying to squeeze behind one of the ribs of umbrella. The critter was small, brown, furry, and mouse size, but wasn't a mouse. I moved the umbrella a bit and the animal hung from one leg and looked at me menacingly with a mouth that gaped red and ugly.


I'd disturbed the daytime sleep of a bat, and the animal didn't look happy about my intrusion.


Bats eat enormous numbers of insects and would, you think, be welcomed by anyone who preferred less mosquitoes and the such, but this just isn't the case. Bats carry rabies, are linked with vampires, and are generally not welcomed. Bats apparently have a predilection to fly into human hair.


As I considered how to encourage the bat to leave, a very funny movie that starred John Candy and Dan Ackroyd immediately came to mind. During one of the many hilarious scenes in The Great Outdoors, these great Canadian comedians do battle with a tiny bat in a cabin.


The bat curled into a corner and I decided to find my camera to document the event. I reached for the water glass to take upstairs and noticed four strings of poop, three right beside the glass and one dangling on the rim. I considered for a moment that the bat had purposely defiled my water. Poisoned my well, as it were.
I also considered the arithmetic. First one string, then two, then four, and I decided the next dump would be sixteen. I picked up the book too.
The pictures I took from outside the umbrella were not great and I decided I needed to get closer. I maneuvered around and got within a few feet but the bat was too scrunched up beside the rib to see much.


I moved the umbrella a little to encourage the bat to move. Nothing happened.


I moved the umbrella a bit more. Nothing happened.


I shook the umbrella a bit hard. Nothing happened.


I really shook the umbrella and the bat slipped from the cozy crevice and dangled upside down.


When the flash went off, so did the bat, which fell down from the roost as I hastily backed away. The bat flew into the yard.


Not possible; a bat would never attack a man!


My heart started to race and I put the camera in front of my fact as a shield and the bat swerved above me.


Coincidence I thought; the bat must be half asleep.


As the bat made another 180, I realized the first attack was not a mistake.


The bat came right at me again and I actually considered swinging my camera to fend it off, but prudently decided just to put the camera in front of me as I ducked. The bat flew right over my short cropped hair and I wondered what might have happened if I were not so bald?


The bat settled back into the umbrella as if this were a permanent residence.


I decided that the bat had won and went back inside.


Louise returned with Pierre and Carol and everyone decided the bat had to go. My thoughts returned to the John Candy movie. Pierre and I had brooms. Louise and Carol wore scarves over their hair.


The three inch bat didn't give up without a fight. He swooped both Pierre and I several times before our superior numbers forced him to relocate to the shady side of a pillar in Gwen and Gerry's next door back yard. The bat stayed there until after dusk.
Posted by wlmrobson@gmail.com at 7:56 pm No comments: