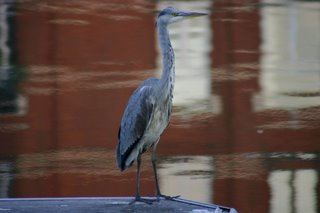 A Grey Heron in Europe, a Great Blue Heron in North America. With slow and deep wingbeats the heron winged over me and circled over the river before landing on the wharf. 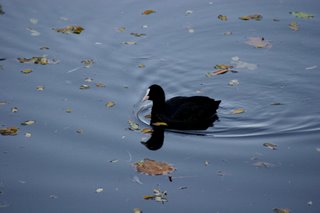 A Coot in Europe and American Coot in North America. 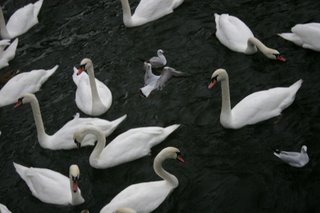 A gaggle of Mute Swans. They were quiet. A man was feeding them along the Main in Frankfurt. The Black-headed Gulls got their share too. There was a solitary female Teal mixed in with the Gulls and Swans. 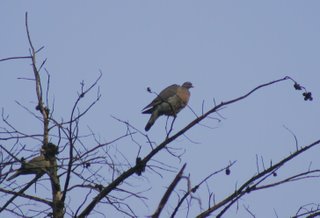 Wood Pigeons are the largest in the pigeon family, and compared to the regular-sized pigeon in the lower left, are clearly large. Perhaps four times the volume? Wow! A first.

We were in a park behind the Miro Museum in Barcelona. The bird was so large that my first thought was a raptor. 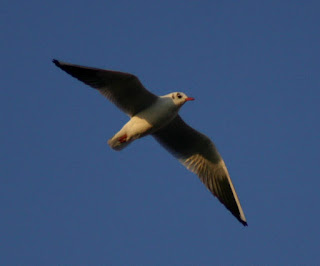 Black-headed Gulls are common in Europe. By the coast, along the rivers, and in the cities.

This is a first year gull. The black heads will appear next spring when the red proximal beak will offer a stark contrast. 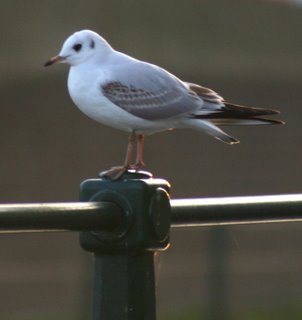 A Common Gull. But not so common that I had ever identified one before. This was a first.

The afternoon temp was cold but the wind made the day very chilly. The gull didn't seem to mind. 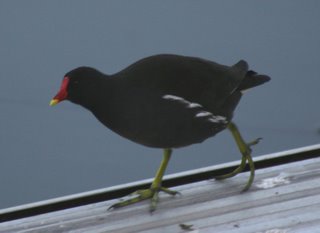 This Moorhen swam along the wharf in one direction and then hopped onto the wharf and walked back in the opposite direction.

The bird was on a mission, as oblivious too my presence, as I was to where he was going. 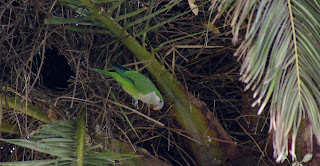 I saw two paraqueets in Europe in November. The first in Brussels was in the gardens outside the Royal Palace. I saw the typical bullet flight but thought the sighting of a parrot at that time of the year to be improbable. Then I heard the squawking. I tracked the birds down and patiently waited until they came into view. A Rose-ringed Paraqueet.

The parrot featured here is the Monk Paraqueet. This parrot has become a public nuisance in Barcelona. Like all paraqueets outside of the tropics these birds were likely released by or otherwise lost from exotic pet owners, and hardy birds that they are, they adapted to the colder climes. The Monk Paraqueet is the only parrot that can build a nest, the entrance to which is well seen in this photo.

Posted by wlmrobson@gmail.com at 5:51 pm No comments: